Posted on November 4, 2018 by brianhuman 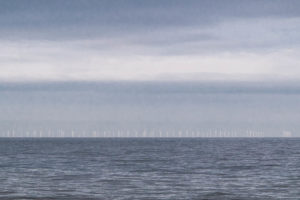 Residents and visitors to Margate can see green power in action – the Thanet Wind Farm is 7 miles off the coast. One hundred turbines cover an area of 13.5 square miles, with 1,600 feet between turbines and 2,600 feet between the rows. It stands in water with an average depth of 46–75 feet. On commissioning in 2010 it was the world’s largest offshore wind farm. The Farm’s maximum output is 300 MW, by yearly average sufficient to supply approximately 240,000 homes, the equivalent of several Margates.   The lazily turning turbines are mirage-like witness to the weather and to the climate on which it depends. 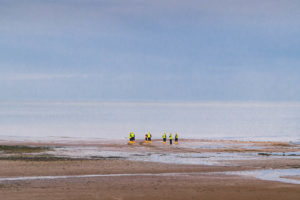 On a calm Sunday morning we watched a training launch of the lifeboat Leonard Kent; a tracked tractor, accompanied by a yellow-clad crew, nudged it noisily across the sand and into the sea behind the pier.  In 1898 a real launch was truly dramatic and tragic.

On 24 February during a gale, the lifeboat was drawn by eight horses to the sands east of the stone pier, the usual place for a low water launch, when turning the carriage, a heavy sea struck the horses washing the riders off and throwing the horses in a heap.  Another attempt was made but another very heavy sea took the horses off their feet and then threw them against the carriage and some of them under it.  The Honorary Secretary and others rushed to the rescue of the men and horses.  Fortunately none of them were lost but four horses were drowned.  £150 was paid as compensation to the owners of the horses