After weeks of indecision I recently stopped being cautious and bought the copy of Sand and Sea in Arabia I saw at the Cambridge Book Fair in February (see post 22nd February 2015). I was not disappointed. At one level it is a fascinating tale of travel and life from a long gone age (1937), while having strong resonances with the troubled state of modern day Yemen. At another level it is an extraordinary combination of travel writing and photography: the attempt to create a seamless narrative with one picture and a block of text on each page is a rare attempt to marry the two media. 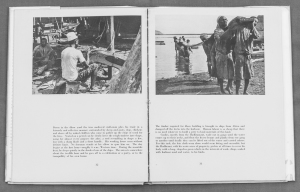 Lewis wrote on the cover flap:
“The book is unique in form. Each photograph is on a separate page and accompanied by its own text, but the textual descriptions are themselves continuous and run together into a complete story. A logical pictorial sequence has been built up in an attempt to recreate more clearly than would have been possible by descriptive writing alone, the charm of a medieval journey in modern times.”

The book’s publication did not go smoothly – rejection by one publisher, arguments over the title and difficulties with the photographic reproduction were compounded by personal problems Lewis was facing at the time. It received modest plaudits. 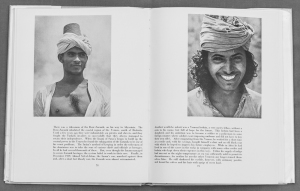 Looked at now, the intention behind the book still stands out as bold and creative, but it does not always live up to its high ideals. The photography is patchy, both technically and in documentary technique. Lewis used a Leica (probably a III or IIIa, as the owner of the R. G. Lewis photographic shops he had a proprietorial interest in promoting Leica cameras*) when 35mm photography was still a young discipline – Cartier Bresson bought his first Leica in 1932. The photography is also let down by the quality of the reproduction. The text is accessible and engaging, but lacks the fluency and understated style that eventually emerged in A Dragon Apparent (1951) and Golden Earth (1952) and, in a succession of books, established Lewis as one of Britain’s finest travel writers. 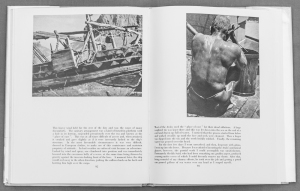 Lewis’s biographer, Julian Evans, sums up the flawed achievement of Sand and Sea in Arabia:
“The book itself, intermittently excellent, with its sharp change of style, is a snatched effort to establish himself as someone with something to say. He was making so much happen in his life in the 1930s, that overwhelmingly heuristic decade that everything in it (apart from his ambition) was snatched, patched and without consistency. He had not decided yet what he was and whether he had more to say as writer or as photographer.” (Semi Invisible Man – The life of Norman Lewis, 2008, p.168.

Lewis never attempted a similar work again. He became a great writer; his photography is barely a footnote in the history of the medium.