Posted on November 7, 2017 by brianhuman

I included a photograph by William Eggleston in my history of photography in 20 photographs for the Forum – his 1976 exhibition at MoMA sanctioned colour photography as serious medium. Two members of the Forum drew our attention to earlier examples of the creative use of colour. 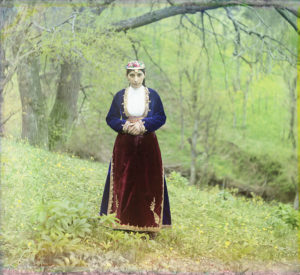 Susan Fifer mentioned Sergey Mikhaylovich Prokudin-Gorsky (1863 – 1944), Russian chemist and photographer, best known for his pioneering work in color photography of early 20th-century Russia.  His technique, first suggested by James Clerk Maxwell in 1855, imitated of the way the human eye senses color.  Photographs were taken through red, green and blue colour filters and then recombined to produce a single colour image. 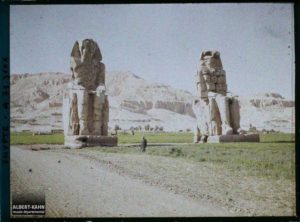 Alan Bird reminded us of Albert Kahn (1860 – 1940), a French banker and philanthropist who initiated The Archives of the Planet, a vast photographic project. In 1909, Kahn travelled to Japan on business and returned with many photographs of the journey. This prompted him to start collecting a record of the entire Earth. He sent photographers to every continent to record images of the planet using Autochrome plates; between 1909 and 1931 they collected 72,000 colour photographs.  (Compare this picture of the Colossi with mine in the post of 11th October 2017.)