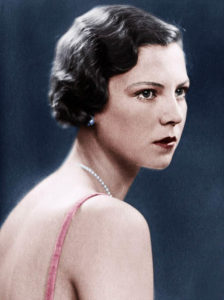 Joan Leigh Fermor has footnotes in the history of the 20th Century as the daughter of a rich and well-connected family, as a confidante of notable literary figures and as the wife of Patrick Leigh Fermor.  Her footnotes should also include her now little-known photography: her obituary in the Telegraph in 2003 said she was ‘one of the most distinguished amateur photographers of her generation’.  Simon Fenwick has expanded the footnotes into a biography, Joan – The Remarkable Life of Joan Leigh Fermor.  It reveals something of her photographic life, which is my main interest. 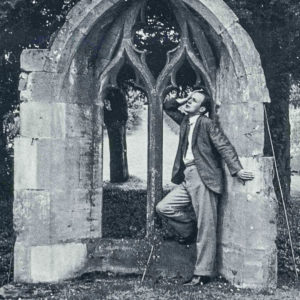 Joan Eyres Monsell was born to Sir Bolton and Lady Sybil Eyres Monsell in 1912.  She went to St James’s School near Malvern, an establishment whose ‘only lasting virtue as far as she was concerned was that it encouraged the arts… [and] there was a photography society’, according to Fenwick.  (All quotes here are from Fenwick’s biography.)  By 1930 ‘she was on the verge of becoming a professional photographer’, taking photographs of friends, society figures and people in arts and literary circles.  The biography includes pictures of John Betjeman, Cyril Connolly, Brian Howard and others.  From the mid 1930 onwards she described herself in official documents as a journalist.  She toured Ireland with Penelope Betjeman taking photographs in 1934.

Joan married John Rayner in July 1939 and adopted the professional name Joan Rayner.  In October that year the Architectural Review published a report on Pere Lachaise Cemetery, Paris, including Joan’s pictures.  In 1941 she photographed bomb damage in London, including commissions for the National Buildings Record.  Photographs of London’s Victorian cemeteries published in the Architectural Review in October 1942 appear to have been by Joan.

Joan met Patrick Leigh Fermor, Paddy, in Cairo shortly after Christmas 1944.  Taking leave in May 1945 she travelled to Iraqi Kurdistan and photographed there.   Reunited with Paddy, they explored Greece, including Rhodes and Ithaca, Joan ‘snapping shops, bars, beaches, [and] temples’.  In October 1947 Joan and Paddy, set out for the Caribbean.  ‘Joan had her camera with her everywhere she went.  When the photographs has been developed, she cut up the contact sheets and pasted the individual pictures into albums which Paddy used as aides-memoires when he was working on The Traveller’s Tree’, (his book of the Caribbean adventure).  Joan photographed the cemeteries in Guadeloupe and Haiti.

In August 1948 Joan was in France with Cyril Connolly, who had been commissioned to write a travel book about Aquitaine – Joan was to be the photographer.  ‘In her pictures [of Valance] it is as if Joan is seeing France through Connolly’s eyes – market stalls laden with fruit and vegetables, a chef with a table of game spread out in front of him….white table cloths and cutlery all ready for the customers.’  Joan wrote to Paddy, ‘I’ve taken lots of photographs but …. I have little confidence in the new camera.’  The proposed book was never published. 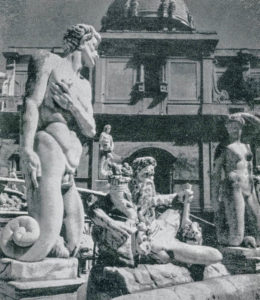 In early in 1949 Joan went to Sicily with Peter Quennellto take photographs for a book he was writing, published in 1952 as Spring in Sicily.  Paddy and Joan were in Turkey in 1950, where she photographed ‘the abandoned monasteries and the harsh, bleak landscape in which they were situated’.  These appeared in an article ‘The Rock Mountains of Cappadocia’ (is this correct, ‘Rock Churches’ surely?) in the Cornhill magazine, c. 1950 – they were credited to Joan Eyres Monsell (Joan and John Rayner had divorced in 1947).  Joan and Paddy explored the Mani peninsular in the Peloponnese in 1951 and discovered the village of Kardamili.  ‘Joan took photographs of the skeletons of boat hulls under construction, as well as men drinking in the bar.’

In January 1952 Joan was in Dublin to take pictures for the Economic Development Administration (EDA).  She wrote very jaundiced letters to Paddy about a photographic itinerary including bogs, factories, peat moss, a drain being laid, a poultry farm, some ruins and a harbour somewhere.  She complains of ‘nearly going off my head with the horror of it all’.  Fenwick suggests that ‘the work lacked any job satisfaction whatsoever, let alone aesthetic gratification.’ 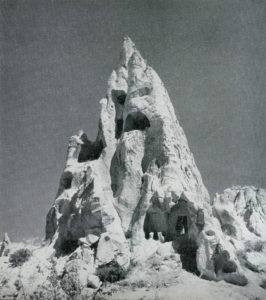 Pictures Joan took of fire dancers in northern Greece found a publisher.  ‘A batch of dusty statues taken in a cemetery in Genoa probably did not find a buyer, despite catching Joan’s eye and imagination.  The rather wonderful oddness of a roadside junk dealer in Normandy, who sold uniformed mannequins, clearly delighted Joan, but unfortunately she does not seem to have found an outlet for their sale.’  The publication of Roumeli in 1966 is reckoned to mark the end of Joan’s career as a photographer, but it is not clear how much photography she was doing in the second half of the 1950s and the first half of the 60s.

Those are the facts of the story as Fenwick presents them.  What conclusions can be drawn about Joan as a photographer? 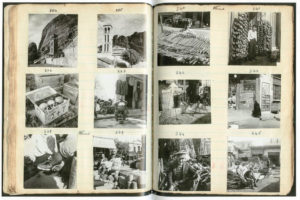 Joan was introduced to photography at school; what she learned then and subsequently is not revealed.  She never had a darkroom and her films were processed by others.  A 1950s album page of 120 film square contact prints reproduced in the biography suggest that at that time she was using a Rolleiflex.

Joan did not exploit her elevated social position by trying to become a society or celebrity photographer.  However, her family connections allowed her to become an intimate of a circle of creative people.  In the early 1930s she met John Betjeman, who was assistant editor of the Architectural Review, and he suggested she specialise in architecture.  Her first husband, John Rayner was features editor of the Daily Express and an influential figure in the newspaper world.   Her association with Cyril Connolly, Peter Quennell and Patrick Leigh Fermor led directly to opportunities to have her work published.  In 1973 John Betjeman wrote to Cecil Beaton recommending Joan for inclusion in a history of photography that Beaton, was writing.  Despite this endorsement, when The Magic Image (Cecil Beaton and Gail Buckland) appeared in 1975 Joan was not included.

Fenwick’s biography emphasises Joan’s enthusiasm for photographing buildings, monuments and her circle of friends.  Looking at Mani and Roumeli, her subjects include landscapes, buildings, portraits and figures in the towns and rural landscapes. Her pictures in Spring in Sicily are exclusively of architectural subjects.  The cover blurb to the book says it ‘is illustrated with photographs specially taken by Mrs Joan Rayner,  but the predominance of pictures by other photographers suggests a limited ability to cover the subjects Quennell wanted.  Joan does not feature by name in the narrative, Quennell referring only occasionally to ‘we’ and ‘us’, this is again suggestive of Joan’s limited role in the trip, perhaps just as helpful and amusing companion.

Fenwick makes several observations about Joan’s attitude to photography:  it ‘was a respectable means of earning a small income’; she ‘was finding a degree of independence and fulfilment in photography’; and the cemetery in Haiti was ‘enthusiastically photographed by Joan’.   These suggest that her photography had a purpose and was probably a source of pleasure.  But there is a certain casualness to it all:  she frequently refers to ‘snaps’ and ‘snapping’, as if to distance herself from grubby professionalism. Of her commission to photograph projects for the EDA, she wrote to Paddy, ‘It’s the last time I do anything like this’.  The hard graft of professional photography was not for her.

Without access to the 3000 photographs in Joan’s collection in the National Library of Scotland it is impossible for me to make a proper assessment of her work.  My evaluation is based on a limited amount of published work. 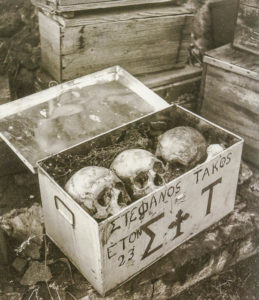 Unfortunately, Joan has not always been well-served by her publishers.  The photographs in the first edition of Mani suffer from a poor tonal range, with flat highlights and shadows lacking detail.  They have a certain 1950s charm, but do little for Joan’s reputation as being technically competent.  However, the 2017 Folio Society republication of Mani and Roumeli reveals cleaner and crisper images that suggest something of the quality that might be on the original negatives.  The photographs in Spring in Sicily were reproduced to a higher standard, reflecting better on Joan’s technique.

Joan’s photography concentrates on a conventional range of subjects suitable as editorial illustration for a range of publications.  She tackles architecture and landscape satisfactorily, with overall sound composition and brings out the essential elements of the subjects.  Among the best pictures are those where she poses and presents figures in a landscape or townscape, both subjects reinforcing each other and capturing something of the harmony between the two. There is some evidence that she had a good eye for detail and the quirky. Her portraits are largely unexceptional and can seem stiff and conventional.  She is least successful with informal documentary style pictures where she lacks the confidence and instinct required to capture the moments that shows people naturally.   Overall the impression is of a competent photographer, who has made valuable historical records of places, but not one able to get under the surface and reveal her subjects in new ways. Photographs of her friends, of the creative circles in which she mixed, evoke a particular era.

The limits to her work and her casual attitude combine to diminish Joan’s photographic legacy. Pictures thrown up by web searches, if relevant at all, concentrate of Paddy – Joan’s work from her assignments and travels is entirely absent.  Modern paperback editions of Mani and Roumeli do not include photographs.  In Fenwick’s biography two-thirds of the photographs are not by Joan, of the 17 that are two thirds are ‘snaps’ of partners and friends. 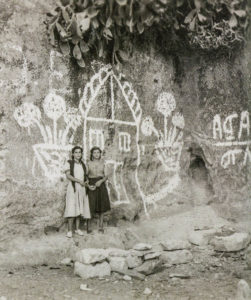 What Joan earned from photography was only ever a supplement to her private income.  She was at best semi-professional, unlike her more widely recognised contemporaries such as Helen Muspratt, Barbara Ker-Seymer and Elizabeth Tudor Hart.  Insofar as it is possible to judge from the limited amount of material available outside the archive, she was a good amateur and the Telegraph’s use of that word is justified.  It is difficult to escape the conclusion that her relative financial independence and the doors opened for her by friends, lovers and husbands reinforced a casual attitude and a failure to develop the range of skills required of a professional photographer.  Photography was not a passion.

Fenwick’s biography is an interesting and enjoyable read and provides a wealth of detail on Joan’s adventurous life.  It’s biggest failing, for me, is that it does not lead to a better understanding of Joan as a photographer – the chance to showcase her work at its best is missed completely.  As a consequence that footnote is only a minor one and Joan remains a vague, if attractive, muse to the men who so often dominate the story Fenwick tells.