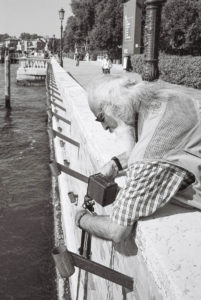 I mentioned photographers using traditional cameras in Venice in my piece about the Guggenheim on 20th September.  This photographer is going even further back: it looks as if he’s using a Box Brownie No.2 dating from the 1930s, or maybe earlier, with 120 film.  He has a tripod attached; though it’s not performing its usual function, it appears to be helping him to hold the camera steady in this peculiar stance while operating the shutter with the other hand.  The choice of camera, tripod and view point, rejecting the easy option of using the balustrade to steady the camera, suggest a serious approach to photography. 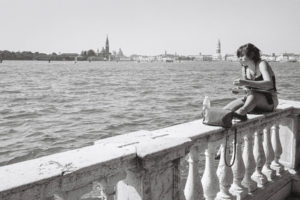 The photographer contorts himself to get his preferred view; the artist relaxes on the wall, portfolio on her knee.  It’s a slight surprise to realise that she is drawing with her left hand.  She is dressed for the sun and has a bottle of water to hand.  She takes time over the picture, the slow process of transferring what she sees onto the paper.  His click of the shutter will capture the picture in a 1/50th of a second, though the use of film represents slow (‘real’) photography. 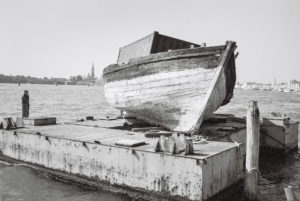 There is nothing odd about people photographing and drawing Venice, indeed if each image took away a little of the City there would be nothing left now.  What attracted attention was that both artists were working on the same subject within 50 metres of each other.  Their subject: Djahazi, the contribution from the Union of the Comoros to the Venice Biennale 2009.  The Biennale guide says: ‘Paolo W Tamburella and five Comorian dockers have fixed up a Djahazi boat abandoned in the old port of Moroni.  The boat, loaded with a shipping container, is docked in the water area opposite the Giardini.’ 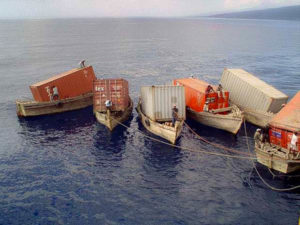 There was a serious intention behind this esoteric installation. Traditional djahazi wooden fishing boats had for centuries been the only means of transport for Comorians; and in modern times they have been used to move shipping containers from cargo boats to the capital Moroni.  In 2006, following the modernization of the port, the use of the djahazi was prohibited.  Tamburella travelled to the Comoros in 2008 in the effort to understand what happened to the dockers and to their boats. He found the djahazis abandoned and rotting in the harbour. A year later Tamburella returned and, working with the dockers, restored one of the djahazi and shipped it to Venice.