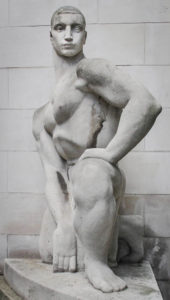 Youth by Wilfred Dudeney stands, or rather kneels suggestively, outside Pemberton House, Pemberton Row, London.  It was commissioned in 1955 to stand in front of the headquarters of the Starmer Group, owners of northern local newspapers, in collaboration with the architects R. Seifert and Partners. Dudeney (1911-1989) was an academic and teacher, a member of the New English Art Club and president of the Royal Society of British Sculptors 1971-75. 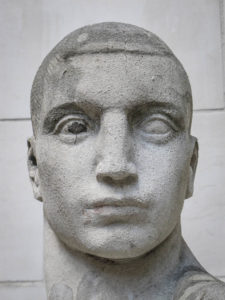 Youth is described as an ‘example of the figurative tradition advanced by modern influences’.  The stance of the muscle-bound figure and the proud stare give it distinctly unapologetic homoerotic overtones.  It combines this with a somewhat Fascist force, not to say aggression.  That Dudeney was a contemporary of Henry Moore, Barbara Hepworth and Elizabeth Frink says a lot about the diversity of mid- 20th Century British sculpture.