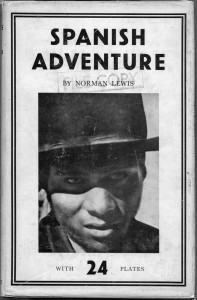 I’ve bought a copy of Spanish Adventure by Norman Lewis, published in 1935.  On a literary wish list for a long time, it complements my copy of Sand and Sea in Arabia (1938, see post 17 June 2015) as the two earliest examples of Lewis’ travel writing.

It was published to rather faint praise, the TLS reviewer saying: ‘This is emphatically not a book to be read by those of delicate susceptibilities, and it is to be hoped that in his next book Mr Lewis will shed the immaturities of style and outlook which are already less noticeable towards the end of the present volume.’  Lewis subsequently distanced himself from it, despite acknowledgement of ‘the book’s distinctive stylistic exactness and formal casualness.’  I’ll make up my own mind once I’ve read it.

A first scan of the 24 illustrations shows that the photography is as patchy as the in Sand and Sea in Arabia.  However, it does seek to support the words and is not mere pictorial padding. To include a picture of a ‘Loaf bearing hammer and sickle, and coins stamped with communist slogans’ is worth the proverbial thousand words about Spain in the 1930s; and the cover picture is very fine, even if the caption ‘Primitive man of Salamanca’ now sounds inexcusable.