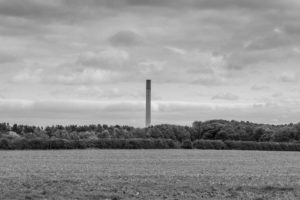 The chimney for Barrington Cement Works is a landmark for miles around, a sign that Cambridge is near for those travelling by road and rail.  It’s also a historical signifier for a village notable otherwise only for its ‘enormous green’ and ‘big church’.  The cement works and quarry were established in 1918 and known as ‘The Dreadnought Portland Cement Company’.   The Barrington Light Railway was opened in 1927 to link the works to the London – Cambridge line. The plant was extended in 1962 and an internal railway system was built to haul chalk and clay from the quarry faces.  By 2005 the internal railway was decommissioned as it was no longer economically viable – at the time of closure it was the last mineral railway in the UK.  The site was closed in 2012.  It is now the subject of proposals for land restoration and building 220 homes.  Perhaps the chimney will be kept – a memorial to a collective experience that will become fragmented memories.